My own personal situation is rather unusual for my age --I was forcibly retired. To be more specific, I was actually thrown out of the FAA (Federal Aviation Administration) in late 1994 on "disability". The "disability" was a psychological assessment (stress or PTSD) and was the result of a year long battle with a supervisor that resulted in eleven grievances being filed. In short, I was essentially thrown out for filing grievances. I did not know that I would never see a "real" job again. It was all small stuff after that, like guard jobs.

Perhaps the most profound result of losing my job with the FAA in late 1994 was my stumbling into the (then) Art Bell show (now called the Coast to Coast AM show with George Noory). This was a VERY important event in my life. That show was the beginning of my indoctrination into the so-called "paranormal". When you are stuck in a guard shack late at night, this show would tend to get ones attention back in that time. The Coast to Coast AM show has been in decline since the turn of the millennium, however, and nowadays my principal "anchor show" has become The Alex Jones Show.

In late 1997, I sold my house in Fairview Heights, IL, and returned to Ohio. Since that time, I have been strictly renting, and have reduced to merely renting rooms. Of course, this also allows me to stay quite mobile. I was residing entirely in Ohio (Columbus and Athens at various times) until mid 2006 when I moved to Las Vegas. I stayed in Las Vegas until mid 2007. The actual story behind this is another long write-up. I went back to Ohio for a time, and then returned to Las Vegas in June, 2009, and stayed there until Sept, 2010. I was going back and forth between these states since 2006, but made my final departure from Ohio in February, 2014. I had considerable trouble in extricating myself from Ohio as I had to sort out over 50 years of accumulated things of both mine and my parents.

I will not likely ever return to Ohio. I was until the election of President Trump considering fleeing by sailboat the nation we once knew as the USA. So, I will be staying in the continental USA. I'm just not sure where. As of January, 2019 I moved back to Las Vegas after having lived on a sailboat in Ventura, CA from May, 2015 to November, 2018.

I have been doing little in the way of "normal" work since mid-2005. I am now experiencing the proverbial "NEW NORMAL". I do have a workable retirement income, but I'm under considerable financial strain. In any case, my websites and my paranormal photography are keeping me very busy.

My days of making a "normal" living by way of a "normal" job are now over. There are a few reasons for this aside from a certain lack of jobs in the first place! Another reason would be a mild sense of IMPENDING DOOM! It should be clear by now to anyone with a half-functioning brain that the entire economic and social fabric here in AmeriKa is at grave risk of complete destruction! 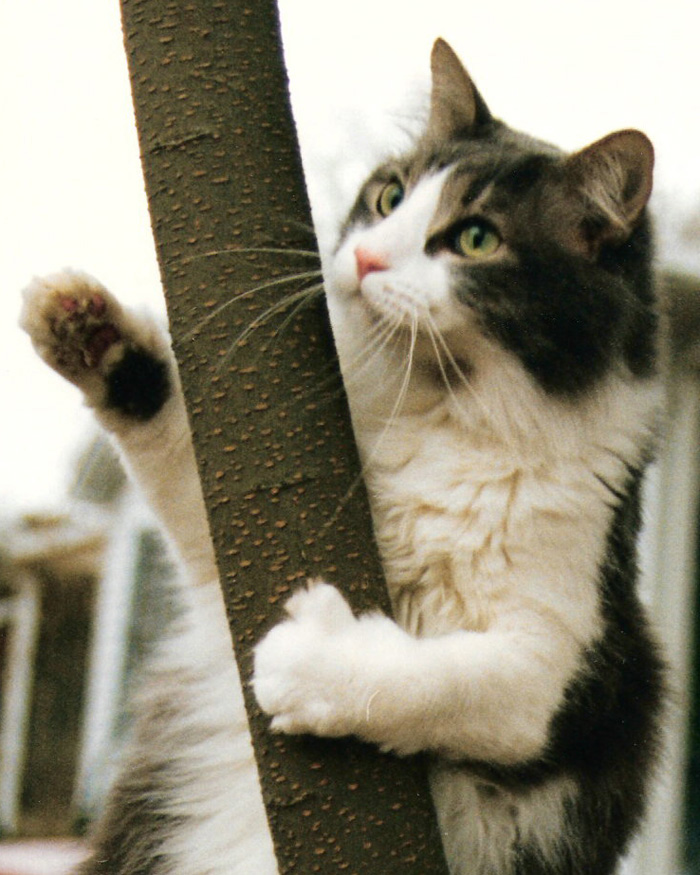 This is my best pic of Uncle Tenoose. It was probably taken during the Summer of 1996. He climbed the small tree beside my driveway really fast and then the pic was taken just as he started to come back down.

This was something of a "scoot-and-shoot" and I was lucky the lens was focused this well. This is a cropped shot. He was actually in the lower left of the original frame.

Oops! This site has expired.

If you are the site owner, please renew your premium subscription or contact support.